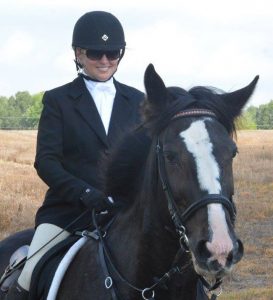 My story with horses begins when I was very young.  I begged my parents without mercy to stop any time we saw pony rides at the side of the road. I would then cry when they took me off the pony.  I started riding lessons when I was seven.  The stable was Clonmel Stables in Port Dover a thriving lesson barn at the time and you were supposed to be at least eight years old.  My mother explained to the instructor, Sandra Fielding that I was horse crazed.  A year later my dad bought me my first pony, a Shetland pony named Silver and my passion for horses just expanded from there.  Obsessed would be an understatement.  I competed on Silver for several years, he was all of 12.2 hh, often in jumper classes against bigger horses.  My mother said there were times when she could only see the tips of his ears on the other side of solid wall fences.  When I grew out of Silver, my parents bought me a two year old unstarted horse named Lisette and, eventually, they ended up buying a small hobby farm where we could have a few horses.  Both my sisters rode as well.  I sound like a spoiled child when I write this, looking back, I was so very lucky.

I started Lisette, the two year old thoroughbred cross filly when I was 11 years old.  My parents bought her for $225.00.  Within a few years after lots of hunter jumper and eventing competing, we were offered $10,000 for her which was a lot of money in those days.  I moved up through the Pony Club ranks, competing at C and B rallies.  Earned B level.  I became a Pony Club tester and I gave lessons.  We kept Lisette until she was 31.  My younger sister competed on her after I did.  I have started almost all of my own horses – that’s what got me into training.

Later on, going to school, having a family and establishing a career, I had less time to spend with horses, so I moved away from it for a while.  I became a registered nurse, worked in hospitals, long term care and then went back to get my degree so I could work in Public Health.  I became a public health nurse and eventually a manager.  While I was busy with my career and family,  one of my my daughters developed an interest in riding and as soon as I had the horse smell in my nostrils I got hooked back in again.  We first got one horse and then two horses and then we had a farm, and so on and so on.

I really enjoy starting young horses or restarting horses – going from an animal that has never been ridden before to a horse that is enjoyable for somebody to ride and enjoys their job.  Eventually, I realized it was time fora  career change: I knew that I had something to offer to horse enthusiasts in terms of training and left my job to work on the farm full time. 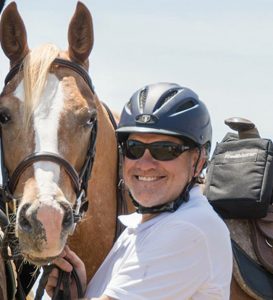 I have been a professional accountant for over 35 years, entrepreneur and involved with junior exploration companies since 2000.  Riding or owning horses was the furthest thing from my mind.

In 2011 a friend and business associate in Toronto owned a successful thoroughbred racehorse.  She said to me: “John, you should get into horse racing”.  So I bought a yearling and called it Nickange One.  The horse was named after my son Nicholas and daughter Angela.

The second horse I purchased was Turfiste, a Kentucky bred stallion who had won two straight races at Woodbine in late 2011.  On April 13, 2012 I attended my very first race as an owner and Turfiste won.  I was now hooked.  He raced a few more times and we decided to retire him and make Turfiste our breeding stallion.

Then a lawyer friend of mine said I should own standardbreds.  So I bought two yearlings, a trotter and a pacer and called them Nickange Two and Nickange Three.  Nickange  Two earned over $78,000 and is now a broodmare.

I didn’t get into riding horses until I met Melanie.  Now I field hunt, on an experienced field hunter –  Ebony  a Percheron thoroughbred cross following hounds, chasing a coyote scent… (The hunt club we belong to doesn’t do a live hunt).  In a few months, I went from the slowest field of the hunt to the fastest.

Melanie introduced me to riding and I introduced her to racing.   As partners, we bring the racing, training and breeding together.